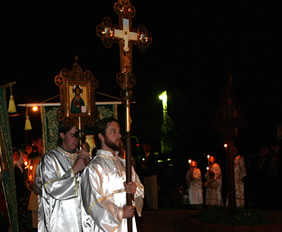 What is the Orthodox Church?

The Orthodox Church is today a federation of fifteen self-governing churches which share a common faith, a common liturgical and sacramental tradition, and a common history beginning at Jerusalem in approximately 33 A.D. In the Old Testament we find the Prophets who foretold the coming of Christ. From the Gospels, and the New Testament in general, we learn about our Lord, God, and Savior, Jesus Christ. We also find the establishment of Sacraments, liturgical worship, and patterns of administrative authority (bishops, priests, deacons) taking shape in the early Church. The Apostles, the twelve original disciples of Christ, undertook numerous missionary journeys traveling from city to city in the ancient Greco-Roman empire and established Christian communities—many of which survive to this day. Despite persecution, Christianity spread quickly throughout the Middle East, Asia Minor, North Africa, Europe, and India. The spreading of the Church led to the establishment of administrative centers around the five major metropolitan cities of Jerusalem, Antioch, Alexandria, Rome, and Constantinople.

The first thousand years of Christianity witnessed to a common faith throughout the Christian world both East and West. There were doctrinal disputes: Arians, Nestorians, Monophysites and others introduced erroneous theologies during the fourth and fifth centuries; “Iconoclasts” attacked the use of icons during the eighth. Such disputes were settled as bishops and Christian representatives throughout the entire world gathered together in council. The decisions of seven of these councils were universally accepted by the faithful and became known distinctively as Ecumenical. Guided by the Holy Spirit, attested to by centuries of countless followers of Christ, the Ecumenical Councils articulate the faith of the One, Holy, Catholic, and Apostolic Church that continues unchanged in Orthodoxy to this day.

The break in communion between the East and West, known as the Great Schism, came in the year 1054. In the West, Rome altered some of the ancient doctrines (“filioque”) as well as added new ones (papal infallibility, immaculate conception, etc.). In the 16th century Protestant Reformers made further changes and deletions. All the while, the remaining four ancient Patriarchates continued steadfast in the same fullness of faith handed down from Christ Himself through His Holy Apostles. Through extensive missionary efforts these four centers were later joined by the Russian and other Patriarchates—constituting the fifteen autocephalous churches today united as One Holy Catholic Apostolic Orthodox Church spread throughout the world.

A Timeline of Church History